Active Ageing: A Way of Adding Years to Life 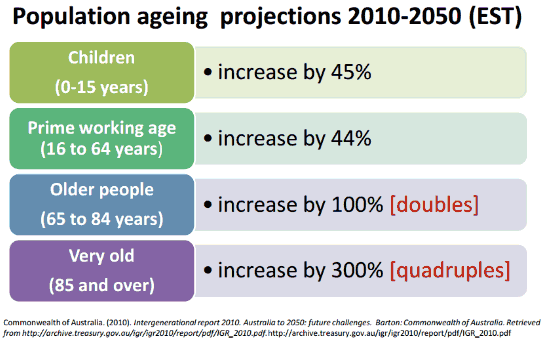 There is an increasing number of older Australians in the total population with the greatest increase 85 years and older (Borowski & McDonald, 2007). According to the Commonwealth of Australia (2010) it is estimated that by 2050 (33 years) older people aged 65-84 years will increase by 100% and the very old 85 years and over will increase by 300%.

The World Health Organisation (2002) Active Ageing Framework describes Active Ageing as a “process of optimising opportunities for health, participation and security in order to enhance quality of life as people age” (WHO, 2002, p 12). Active Ageing involves the continued participation and maintenance of physical activities, engagement in social, economic, spiritual and civic activities as well as cognitive functioning, productivity and life satisfaction (McIntyre, 2013).

There are many factors that influence active ageing, including personal and lifestyle factors, economic resources, psychological and physical factors and access to health and social services such as long term care (McIntyre, 2013).
Home Sweet Home Care Nursing provides the care and support through our qualified nurses and carers to allow older adults to gain and uphold personal resilience, independence and autonomy, whilst maintaining social roles, activities and relationships enabling them to live a productive lifestyle.